Stablecoins: The Currency of the Metaverse?

After DeFi, stablecoins have the potential to become the base layer of Metaverses 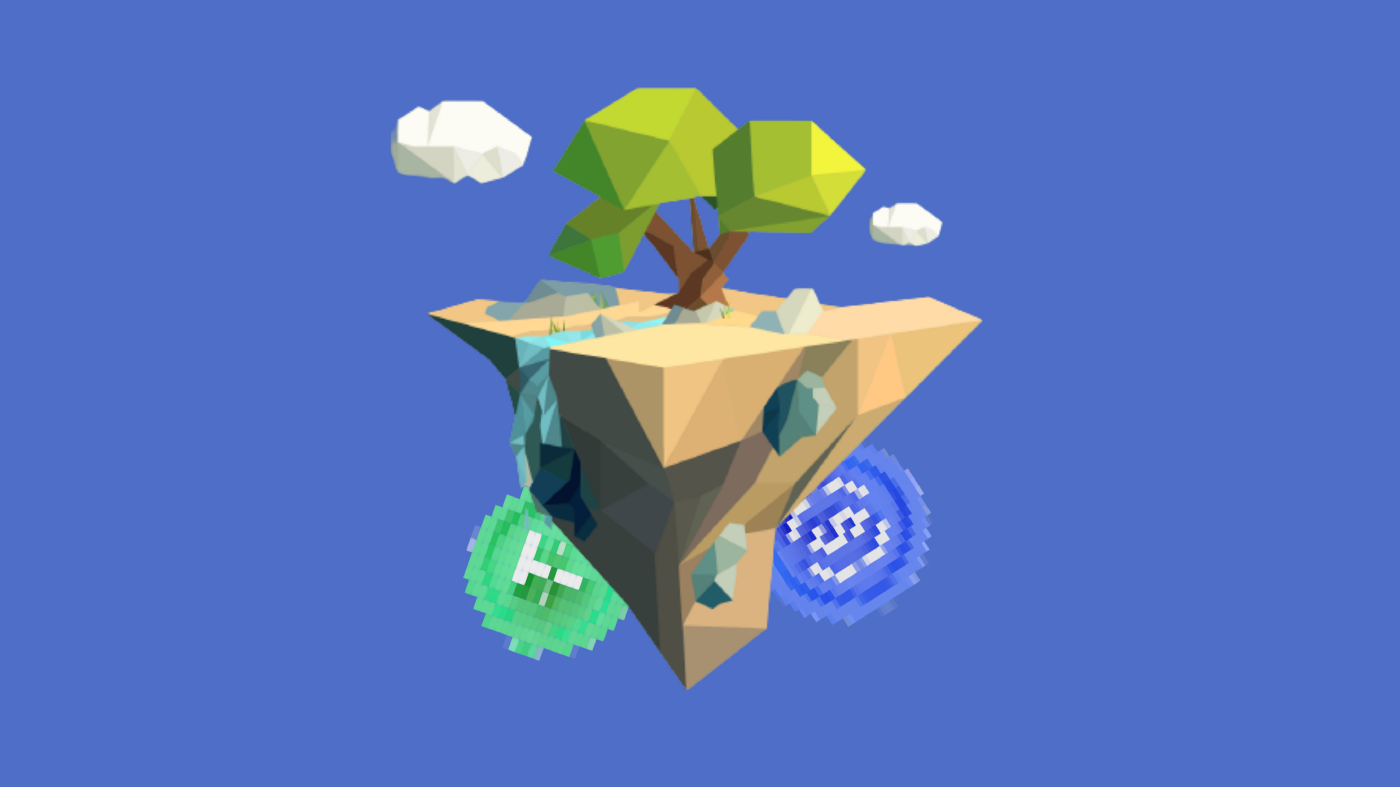 The Internet is changing. Metaverses are emerging technologies that combine monetization of virtual assets and fusion with the real world through augmented reality. In 2021, cumulative sales accounted for more than $500 million on the three main metaverses in the crypto ecosystem: Axie Infinity, Decentraland, and The Sandbox. This web transformation looks so promising that Bloomberg estimates that this market will be worth over $800 billionby 2024. In this new Internet of value, one question arises: what will be the currency used by the users of the Metaverse?

At Lugh, we believe that stablecoins are the best payment tool to acquire value in the virtual world. Stablecoins, which are today the base layer of DeFi, also have the potential to become the currency used in the Metaverse.

A reliable currency for a new virtual economy

On the Internet of value, the buying and selling of digital assets in the form of NFTs drive economic life. Whether to acquire furniture, clothing for an avatar, or a virtual house next to Snoop Dogg, it is necessary to have a currency that connects the virtual and physical worlds.

- Advertising: The purchase of billboards by companies to promote their brand or product

- Art Galleries: The ability to sell NFTs in auctions

- Music concerts with a ticket in the form of NFT …

This new economy will need a universal, reliable, and low-volatility payment system to prosper.

From Metaverses to Multiverse

The journey to enter this metaverse economy requires extensive knowledge of the crypto ecosystem for a neophyte. To interact with The Sandbox or Decentraland, the user must have a crypto wallet like MetaMask and convert dollars or euros into Metaverse’s native cryptocurrency. It involves acquiring SAND on The Sandbox or MANA on Decentraland.

At present, users must therefore buy quite volatile tokens to interact with the Metaverse. These assets are not interoperablebetween ecosystems, so an Axie Infinity user will have to convert AXS to USDT and then USDT to SAND if he wants to use his funds on The Sandbox. Such a process requires time and transaction fees. From a user experience perspective, converting crypto from one ecosystem to another can be tedious.

Metaverses will gradually tend to merge and become interoperable to provide a single user experience within a Multiverse. This is why using a truly interoperable payment system is crucial, which is not the case today with the multiplication of native tokens that can scare off newcomers.

Stablecoins: the base layer of the Metaverse

Users must be confident that transactions have been carried out and are irreversible. Hence the interest of a public blockchain like Ethereum or Tezos, whose register is transparent. Crypto is therefore consubstantial to the creation of a Metaverse, but not all are adapted to this technology.

Indeed, this metaverse economy should also be based on an asset with a stable value in the real world. Otherwise, users would find it difficult to use two accounting systems, and the psychological cost would be far too high. Rather than systematically converting the price of a piece of parcel, it would be much nicer to have a price denominated in stablecoins. People think in fiat and will not change that soon because they are used to paying in dollars or euros in the real world.

So it’s easy to see why stablecoins can become the base layer of the Metaverse: easy to deploy, present on multiple chains, and therefore interoperable. Above all, they represent a tangible value in the real world. Stablecoins like USDC circulate on many chains like Ethereum, Solana, or Avalanche and are widely used by wallets, protocols, and exchanges. Thanks to Circle’s API, it is even possible to process payments by credit card or wire transfer, which gives users many possibilities to acquire USDC. Few crypto-assets are as easy to access and as reassuring for a newcomer.

While stablecoins already form the foundation of DeFi and have allowed it to reach billions of dollars in volume, their adoption into the Metaverse will enable this technology to reach new heights.

This is also the thesis defended by Meta (formerly Facebook). If initially, the Diem stablecoin was to interact with the Metaverse, Meta will eventually not produce its own token but will probably use a regulated stablecoin. The Novi wallet that integrates USDP (Paxos), a regulated stablecoin would interact perfectly with the Metaverse by allowing stablecoin to be exchanged for services offered by Meta. The company, traumatized by its legal setbacks, now understands the value of regulated assets. In particular, the tech giant is looking into the possibility of building an NFT marketplace on Instagram, where the Novi wallet would likely have a special use.

A little stability in an uncertain environment

In recent months, Metaverses such as Decentraland or The Sandbox have reached new records in terms of market capitalization amounting to several billion dollars. The web3 is attracting the attention of investors who are well aware of the transformation of the Internet, which is increasingly moving towards a creator economy where content monetization is becoming the rule.

However, the evolution toward the Metaverse is also accompanied by uncertainty and unpredictability. Investors and users take on substantial risk when an entire virtual economy is based on a volatile token. Stablecoins would mitigate this uncertainty since all assets in the Metaverse would have a value that does not depend on the evolution of a token. Investors can then calculate the value of their assets in terms of fiat currency and their returns over time.

Some Metaverses have understood the interest of stablecoins to bring stability and trust and are starting to implement them in their economic system. For example, since the introduction of Dai on Axie Infinity, users can acquire digital assets with a low volatility currency.

In the same way, The Shiba Inu Project (SHIB) recently announced its plans to launch its own Metaverse. Investors will be able to acquire virtual items through ETH, as the team wants to integrate a “neutral” currency that can easily be converted into stablecoins for developers. In the long term, the goal is to directly implement the SHI, the Shiba Ecosystem Stablecoin, which is under construction.

Stablecoins will accelerate the adoption of play-to-earn in gaming

One of the first sectors that the arrival of the Metaverse will transform will undoubtedly be the gaming industry. Gaming DApps are among the most famous applications today: Alien Worlds, Spinterlands, Aavegotchi, Axie Infinity, etc. The financialization of video games and the shift towards play-to-earn also require a reliable and stable payment method.

GameFi allows users to earn virtual assets in the form of NFTs as a reward for their efforts in the game. They can then sell them on a marketplace and earn income from them. The gaming industry is enormous and represents more than $300 billion worldwide. But what was missing was a universal payment system that could be used in games, outside the ecosystem, including in unbanked countries. Stablecoins are the solution.

Especially since they are already operational and can be integrated into video games very quickly. For example, Circle has created a payment API to acquire video game skins in the form of NFT in USDC. The idea is to provide gamers and developers with a stable foundation for a gaming economy. Game developers like Dapper Laps have already been relying on USDC since 2020.

This new economy that is emerging will bring its share of new businesses. They are increasingly showing a desire to be paid with stablecoins, according to Julien Bouteloup, the founder of Stake Capital. It is also possible for game producers to automatically charge commissions on the game’s economic activity, thanks to stablecoins. Therefore, stablecoins will facilitate developers’ remuneration for services related to the Metaverse.

While stablecoins significantly improve the user experience in the Metaverse, those regulated, such as the USDP or EURL, also have the advantage of being built in concert with regulators. This asset in compliance will favor the adoption of stablecoins in the Metaverse.

In February, Margrethe Vestager, the European Commissioner for Competition, stated that the EU authorities were studying future regulation of metaverses. It is inevitable and will necessarily affect the payment system in force in the ecosystem. China, for its part, has already announced that it wants to regulate the “Chinese Metaverse”, which would be based on the crypto-yuan, which has no volatility compared to the national currency.

“We should start thinking about it now [Metaverse regulation]”, Margrethe Vestager

Moreover, the arrival of large companies, as we have seen recently with the purchase of parcels by Gucci or HSBC on The Sandbox, is imminent. The Metaverse allows these companies to expose their brand for marketing purposes. This entry will be even more accepted if it is possible to pay with a government-regulated cryptocurrency. It is also easier for these companies to hold some cash in stablecoins to invest in Metaverse rather than unregulated native tokens.

Unquestionably, regulated stablecoins have a huge utility in building a compliant metaverse.

A stablecoin to serve Europeans

The Metaverse raises vast questions of sovereignty. Will Europeans accept to use a metaverse under the hegemonic control of a tech giant like Meta or Baidu? Will they agree to use a $ stablecoin regulated by an American jurisdiction and whose reserves are located outside the European continent?

In response to this issue of sovereignty, French President Emmanuel Macron proposed the creation of a European Metaverse, which would carry the European values of ethics, regulation, and ecology. Such a project would involve supporting the technologies underlying metaverses, such as graphic engines and payment systems.

“This is a key subject both for creation, but also for the ability to allow all our creators, whatever their cultural fields and their fields of activity, to create and not depend on actors or Anglo-Saxon or Chinese aggregators, who will be able to completely circumvent the rules of respect for copyright or related rights.”

In this perspective, EURL will be able to serve the interests of Europeans and preserve their sovereignty. Whether in the context of private or decentralized Metaverses, we believe Europeans must be able to use a euro-backed asset regulated by European democratic institutions.

EURL: a euro-backed stablecoin that intends to integrate the Metaverse

At Lugh, we believe that stablecoins will be the most popular payment method in the Metaverse. They are the most promising tools for acquiring digital assets with little friction, low volatility, and a real-world anchor.

We are convinced that the revenue model of the Metaverse will be NFT, and stablecoins will be the preferred means of payment for trading them. A stable and regulated monetary layer on which virtual worlds will be built.

EURL, a 1:1 stablecoin backed by euros held in a major financial institution, Société Générale, and whose reserves are audited by a top international audit firm, can fully integrate into this new web3 economy.

We have written an article about buying NFT with stablecoins. Feel free to read it!

See the article on
Medium